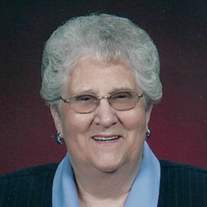 Anna Luise Klasina Summers age 85, of Jasper, passed away Wednesday, July 03, 2019 in Jasper. She formerly resided in Shoals and Loogootee. She was born February 25, 1934 in Amsterdam, Holland to Franz and Babetta (Martin) Holtij. She married William Carl “Bill” Summers on May 5, 1956 in Stutgart, Germany. He preceded her in death on April 14, 1992. Anna was employed at Ralph Sherfick Grocery Store in Shoals, The Shoals Café, was the Activities Director at Gentle Care in Loogootee and Crane NAD. In her later years she stayed active by crocheting hats for the Cancer Center in Jasper, made blankets for the OB Department of the Jasper Hospital and made gowns for still born babies. She was a member of St. John’s Lutheran Church in Loogootee and the Shoals American Legion Ladies Auxiliary. She is survived by one son, Jesse Edward Summers of Lamar; four grandchildren, Amy Summers, Kristine Summers, Jeremy Summers, Jessica Summers; eleven great-grandchildren; one sister, Heidi Marie (Walter) Steinmetz of Bad Homburg V.D.H, Germany; and one half-brother, Walter Martin of Urpha, Germany. Preceding her in death are, her parents, husband, great grand-daughter Emily Cashmore and one brother, Heinrich (Hank) Holtij. Funeral services are 1:30 PM Saturday at the St. John Lutheran Church in Loogootee with Pastor Tim Fleace officiating. Burial will be in the Hindostan Cemetery. Visitation will be 10:30 AM until the time of service at the church. In lieu of flowers, memorial contributions may be made to St. John’s Lutheran Church General Fund. The Queen-Lee Chapel of the Thorne-George Family Funeral Homes is in charge of the arrangements.
To order memorial trees or send flowers to the family in memory of Anna Luise Summers, please visit our flower store.