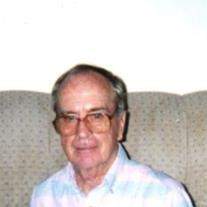 Allan A. Sims, 82, passed away on August 25, 2015 at his residence in Trinity Springs. Born on October 16, 1932 he was the son of Fred and Mary Frances (Wildman) Sims. Allan was a beloved member of the community and will be remembered for his willingness to help anyone in need and his friendly smile. He attended Trinity Springs Schools, graduated from Williams High School, and proudly served in the United States Army during the Korean War. He was a member of the Shoals American Legion Post #61, White River Masonic Lodge F. & A.M., and currently served on and was treasurer of the East Fork Water Board. Allan attended the Trinity Springs Church of Christ and loved watching NASCAR. He was formerly employed at National Gypsum, and retired after 33 years from NAD Crane. He also read the meter for REMC and worked for the East Fork Water, Martin County Highway Department, and recently retired as custodian from Old National Bank. Survivors include his son Gary L. and wife Carla Sims of Shoals Grandchildren, Chris Sims, David Sims, Travis Souerdike, Wendy Banks and A.J. Banks. 8 great-grandchildren Former wife Rita Warren Brothers, Merrill and Barbara Sims of Avon John and Deanni Sims of Brownsburg Numerous nieces, nephews and a host of friends. He is preceded in death by his first wife, Doris Shaw; a daughter Beth Ellen (Sims) Souerdike; son Jon A. Sims; brothers, Loran Sims and Frank Sims in infancy; sisters, Mary Alice Franklin and Joyce Tuttle. Visitation will be from 4:00 – 8:00 p.m. on Saturday, August 29, 2015 at the Queen-Lee Funeral Home in Shoals. A masonic service will be held on Saturday evening at 7:00 p.m. Funeral services will be conducted at 2:00 p.m. on Sunday at the funeral home. Burial will be made in Trinity Springs Cemetery. Shoals American Legion Post #61 will accord military graveside rites.
To order memorial trees or send flowers to the family in memory of Allan A Sims, please visit our flower store.