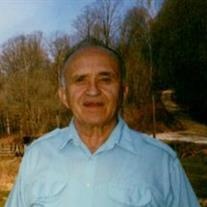 Adrian Courtright, 83, of Loogootee, Indiana, passed away on April 9, 2015 at 7:00 a.m. at the Memorial Hospital and Healthcare Center in Jasper. Born on July 22, 1931 in Martin County he was the son of the late Dale and Violet (Hamilton) Courtright. Adrian was formerly employed as business manager for NAPA Auto Parts in West Baden and retired after 16 years from Perfect Fit in Loogootee. He was a graduate of Loogootee High School. In his earlier years, Adrian was a minister, serving several congregations in Indiana. His first pastorate was the Pilgrim Holiness Church in Shoals. He is survived by sons, Edward Lee Courtright and Fred Dale (Suzan) Courtright both of French Lick; daughters Sandi (Jay) Baker of Hilham and Peggie Collins of West Baden. Four grandchildren, Jaimi Rickelman, John Baker, Marina Courtright and Delainya Frizzi, eight great-grandchildren, and one brother Marlin Courtright of Shoals. He is preceded in death by his parents and one brother in infancy. Visitation will be from 4-8:00 p.m. on Saturday, April 11, 2015 at the Queen-Lee Funeral Home in Shoals and from 8:00 a.m. until the hour of service at 2:00 p.m. on Sunday at the funeral home. Burial will be made in the Baxter Cemetery in Halbert Township.
To order memorial trees or send flowers to the family in memory of Adrian Courtright, please visit our flower store.